As told with fondness by grandson Dick Wright 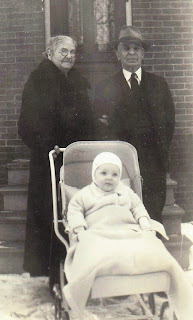 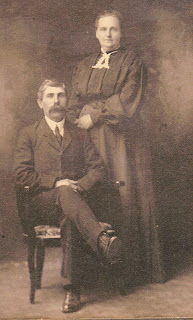 My grandparents Harriet and Nelson Perry (left) take me out for a walk, winter 1938. It was a tough job, but they seemed to want to do it. In the photo to the right they posed for a formal portrait in 1890. They also posed for the camera (below right) on the occasion of their first date in 1878. With them are Nelson's brother Robert and his wife Charlotte and Harriet's brother Robert Peck (all seated) and his wife Charity (standing to Nelson's right).  Incidentally, Charlotte and Harriet were sisters.

Harriet and Nelson Perry:
Humble beginnings but a rich life 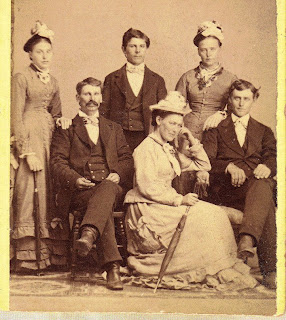 Ten dollars was a huge sum for Ingersoll born Sidney Nelson Perry, 18, to invest in homemaking when he ignored the objections of parents and married pretty 17-year-old Harriet Peck of Tillsonburg. On the diamond jubilee of that wedding, December 27, 1938, he admitted before five daughters, four sons and 22 grandchildren that his earlier bank-breaking investment was a pretty sound one.
..
The young couple supplemented that small outlay with an abundance of courage, faith and hard work over the course of the next 62 years. Their first home was in Oxford County near Ingersoll where Nelson worked "dawn to after dark" earning $150.00 a year clearing bush for pioneering settlement.
.
Entrepreneurial blood was in his veins, however, and Nelson moved Harriet and by now several children to Camlache (on Lake Huron), then Brigden in Lambton County and later Courtright (the St. Clair River) where he worked in the meat butchering business. With six of their nine children still in tow, the Perrys came to Dresden in 1905 where they established a family-run bakery and general store. See photos http://dicktheblogster3.blogspot.com/
.
After retirement, they moved to Detroit with their two youngest daughters, Beth and Grace, to be closer to several older sons and daughters who had previously settled there. When Grace married Kenneth Wright in 1932, they moved "back home" to live with the newlyweds in the Wright homestead on Sydenham Street in Dresden.
.
Wherever they lived, however, you could depend on at least four family gatherings a year -- Christmas, Easter and Thanksgiving with annual summer reunions thrown in for good measure. Laughter, hugs and good food being the order of the day, always. The love shared by each and every member of the family, siblings included, was unquestionable and unconditional.
I did not have brothers or sisters but I had my cousins -- 21 to be exact, and I was the youngest of the bunch. I consider myself to be extremely fortunate in that regard. Sadly, however, I am the only survivor from that large group of first cousins.  An extra bonus for me when growing up was that I had all those special aunts and uncles to spoil me, especially at Christmas and birthday time and, boy, did they ever!

My grandmother had a magnetic Christian serenity about her. I was not quite two-years-of age when she became very sick, but I cling to memories of crawling up on her lap and feeling the warmth of her bosomy embrace. Years later my aunts could not believe that that I would have memories from such an early age. I think that, in a way, they derived comfort from it. Very much the family matriarch, Gramma passed away August 10, 1940. Grampa joined her May 24, 1951.
.
I miss them to this day.

Harriet was the daughter of John and Sarah (Lowe) Peck and was also the youngest of nine brothers and sisters.  .(
(((((
Births in John & Sarah's family


PERRYS & PECKS:  From the left, Susanna (Peck), Nelson, Harriett, Robert Peck, Charlotte (Peck), Caroline (Peck); Perry; Nelson's daughters Grace and Edith kneeling in front.
"Memory is a way of holding onto the things you love, the things you are, the things you never want to lose." -- From the television show The Wonder Years
.
.. 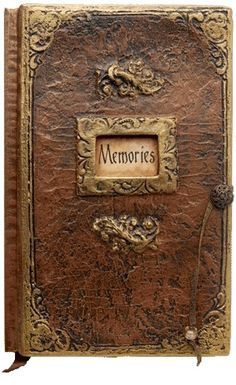 Posted by Visit Wrights Lane at 9:16 AM No comments: 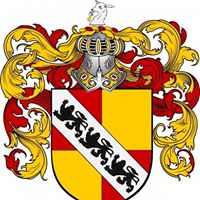 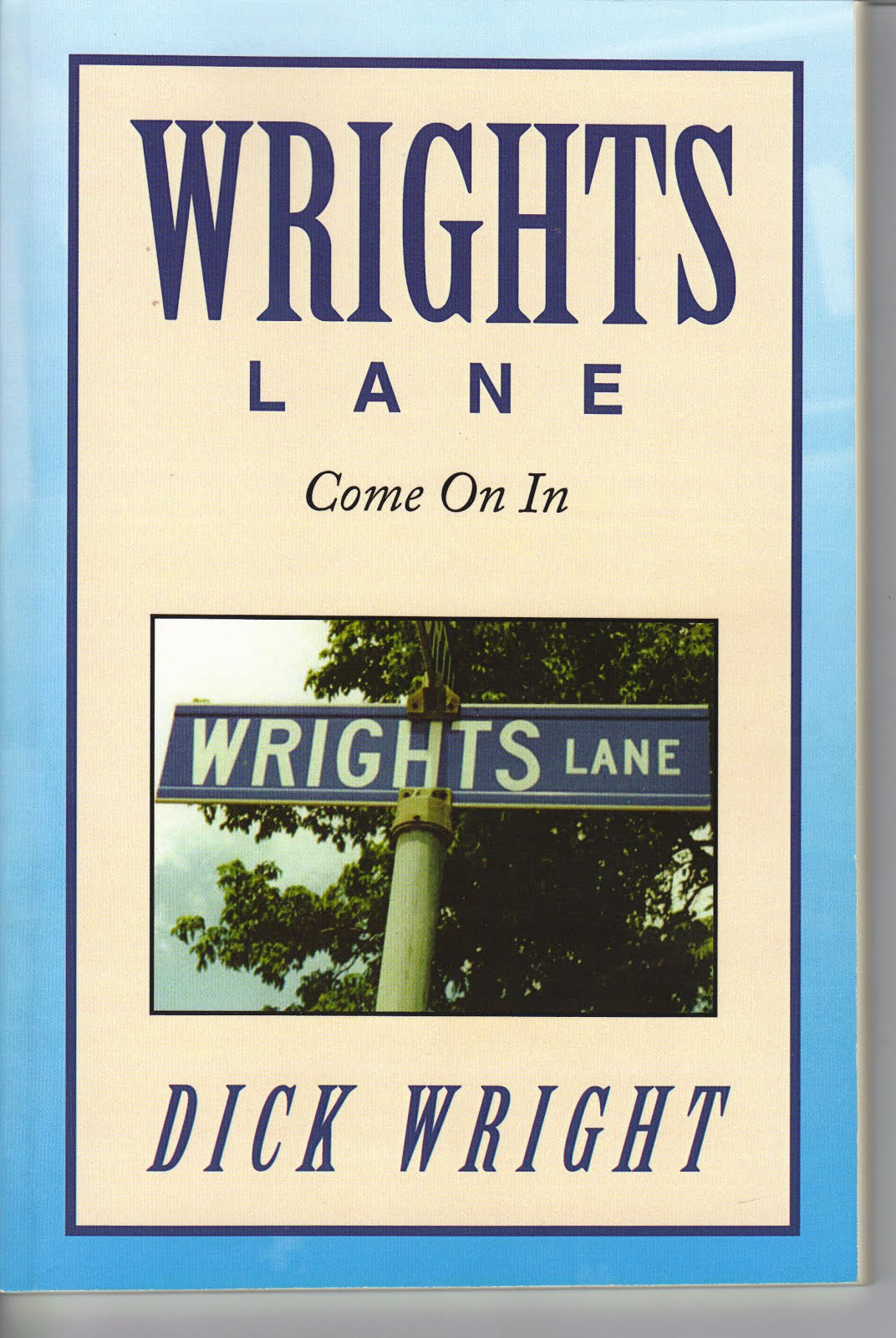 ...click on my anchor site, from my computer to yours 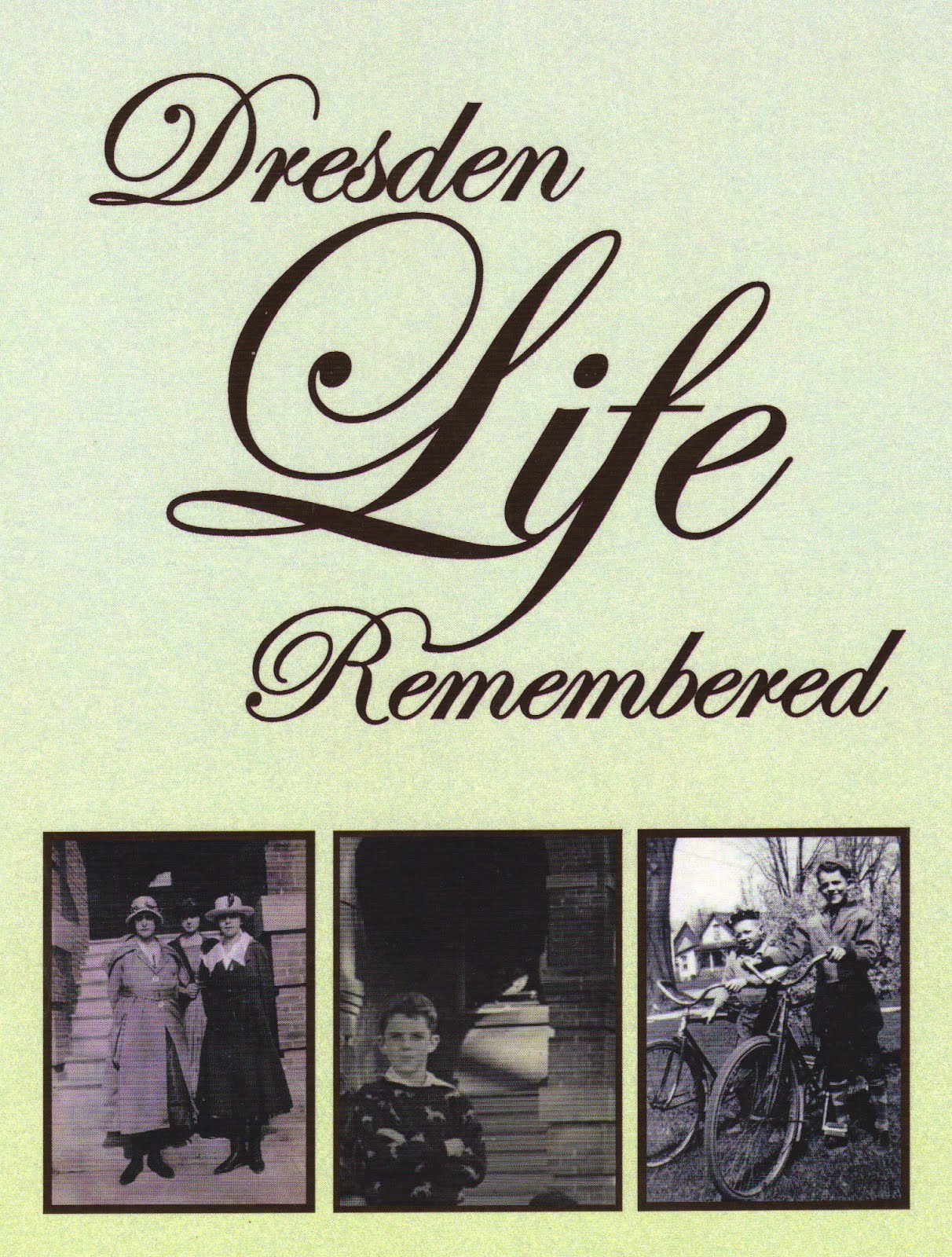 ..."DRESDEN: Father and son turn back the clock" *Just a click away. 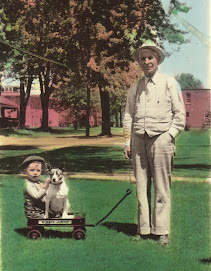 My grandfather Perry was more like a best pal for me during the 13 years that he lived with us. We did just about everything together. He taught me how to whittle, make corn cob pipes and rattle bones (lost arts today). He even bought me my first two-wheel bicycle for passing from Grade 3. At 91 years-of-age he was still playing catch with me in our back yard, pretty good considering he lost four fingers from his left catching hand in a butchering accident many years before.

He would spend a few days at a time with his other eight children but always cut his visits short to get back to his youngest daughter and son-in-law's home in Dresden, saying he missed "ole Dick".

At the supper table on May 24, 1951, he asked me how I made out in my first game of the baseball season. "We won!" I answered enthusiastically. "What was the score?" was his natural next question. "24-2" I replied. He laughed uncontrollably at the lopsided score, pushing his chair back and doubling over as he reached for his table napkin to wipe tears from his eyes.

After supper he lit his pipe, read the local newspaper for a while, went to bed and never woke up.

I'm so happy I gave him his last laugh.

A PHOTO THAT SAID IT ALL. 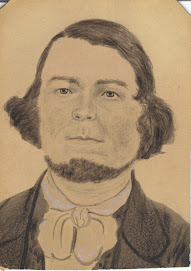 Grampa Perry's father William, 1820-1861. William died tragically at 41 years of age when he slipped on thin ice over an Oxford region creek and drowned. It was not until spring thaw that his body was recovered. He left a family of eight children, including his youngest, Nelson, 1. It was an extremely impoverished life for the widow and eight children, but they all pitched in and somehow made it, thanks in large measure to inherited pioneer grit and thrift.

STILL IN LOVE AFTER ALL THOSE YEARS: Gramma and Grampa Perry at their 60th wedding anniversay celebration at the Blue Bird Restaurant in Chatham, December 27, 1938. Photo and story appeared in both the Windsor Star and the Chatham Daily News. 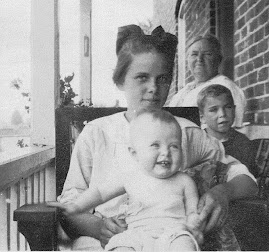 Twelve-year-old Grace holds baby niece, Dorothy, on her lap while nephew Billy and Gramma Harriet look on approvingly. Grace's brother Archie was the father of Dorothy and. Billy belonged to George. 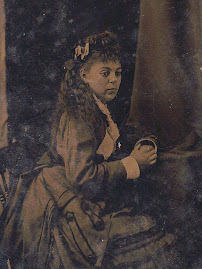 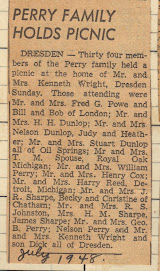